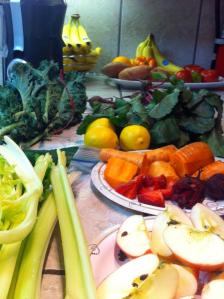 Tonight, the hubs and I actually had just juice for dinner. (I know, who ARE we now?!)  Well, plus a little fruit and veg we nibbled on while washing and prepping 🙂  We use a Hamilton Beach Big Mouth juicer (only $59 on Amazon!), which has been working well for us so far.  My juicing tips for y’all:

…And onto the Juice of the Day! (which looked a little funky tonight due to the mix of veg) 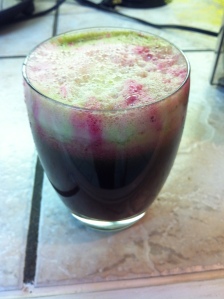 Makes about a 16oz mason jar full, give or take, depending on your juicer and the juiciness of your vegetables 😉 If you are just beginning green juices and want it a bit sweeter you can always subtract some of the greens/celery and add an extra apple. Enjoy! 🙂

Green smoothie of the day!

This is enough for only one smoothie. The fruit was fresh that I froze myself. Not necessary to use it frozen but it makes it nice and cold 🙂 I personally did not think it needed honey but you can if you’d like it sweeter. Raw honey, virgin coconut oil, and the bee pollen mix have lots of nutritional benefits but are not essential to the smoothie. Put everything in the blender and blend it up! Enjoy! It was delish 🙂

Many thanks to the beautiful and talented Jamie of http://kawaiiordie.com for my wonderful logo! ❤

Well, here I am! Back in online journal land–excuse me–BLOG land now. After many years away from the heyday of lj, it feels a bit strange (yet oddly comfortable) to be writing to an “audience” again. So much has changed in those years but what never faltered was my desire to be a wife and mother. Now, I am finally living “the dream”!

I guess this is a good place to introduce myself. This will most likely be the longest entry I will ever write in here, so bear with me! My name is Rachel, I’m 31, and I was born, raised, and currently reside in the culturally fabulous Louisiana. My husband Derek and I met in 2008 on roommates.com (or was it Craigslist first? that battle will never be settled!) in a twist of fate that proved to be the best decision of our lives. We felt an instant connection and innately felt we could trust each other. We both needed a roommate to split the rent but got so much more than we ever could have bargained or hoped for.

Fast forward and we have been married for a little over two and a half years and have a ridiculously awesome two year old son named James. (No, I’m not biased at all!) After I had James, everything started to really make sense. I have always, always felt in my heart that I wanted to be a mother, and I truly think I am the best version of myself (so far, anyway!) now that I am one. I had a blossoming, successful career when I became pregnant with my son. Once I had to return after my maternity leave was over, I never felt “right” being away from him. I know most working mothers feel that way, but this wasn’t a feeling I felt I could ignore. My wonderful husband backed me 100% so it became our goal to figure out a way to get me home with him everyday. It was difficult in some ways to leave my established career behind but I felt confident in my decision to be there to raise my son myself. Thus, August 10, 2012 was my last day at my old job and (as cliche as this is) the first day of the rest of my life.

Being a SAHM (stay at home mom) is what I feel I was put on this earth to do. Looking back, I don’t know how I even made it through the first 20 months of my son’s life being away from him 10+ hours a day. Don’t get me wrong; being a SAHM is hard. Every single day is full of obstacles… but every single day is more rewarding than all the years I spent in other jobs combined. Being a mom constantly makes me want to learn, grow, and be the best person (thereby, the best mom) I can possibly be. That’s where the idea behind this blog fits in.

Almost 10 years ago, I found out I had systemic candidiasis. The short explanation is that through a combo of years of over-prescribed antibiotics, steroids, unhealthy foods, etc, my body had become a great breeding ground for yeast overgrowth, so great that it invaded my bloodstream and affected all parts of my body. The migraines, mood swings, sinus infections, exhaustion, IBS, eczema, excess weight, etc etc etc were all side effects of the evil candida. When I first saw the long list of “bad” foods and very short list of “safe” foods the doctor’s office gave me, I felt like my life was over! No processed foods, no fried foods, no sweeteners or even fake ones, no white potatoes, pretty much no grains, no alcohol, and the list went on and on. Food was such an important part of my life!! I live in LOUISIANA! How would I ever survive?! Reading all the symptoms and having them match up with so many of my problems that I thought were totally unrelated really floored me though. Could this be the answer to all my problems?! I made it my mission to destroy the candida. I wasn’t letting it run my life, emotions, and cravings anymore.

I did the diet hardcore for a few months and lost a ridiculous amount of weight very quickly. I was feeling great and many of my issues had improved greatly or disappeared! I then reached the phase where I began adding some “bad” foods back in to see how my body handled it. This was a dangerous, slippery slope for me. Soon, I was back into the carb addiction’s steel trap. I eventually gained all the weight back and then some. I was around my highest weight ever at the time when I found out I was pregnant with my son. I tried to eat healthily while pregnant but found it a challenge, since I craved carbs nonstop.

James was born seemingly very healthy, but it stands pretty clear that he “inherited” some of my yeast issues, which was made worse by multiple things. We started him on a good probiotic powder around 3 months old (when I had to switch to formula). It helped but he still had significant eczema. It was so hard for me to see my baby’s skin so dry, red, inflamed, itchy, cracked, and uncomfortable. Lotions didn’t seem to make much difference (and we tried a ton!). I needed to find a way to heal him from the inside out. At a year old, we cut dairy and gluten. We kept him away from processed sugar, most processed foods, etc. It definitely improved his symptoms but he still had bad flare ups. I was introduced to an elderberry syrup made with local honey that boosted the immune system and supposedly helped eczema. We started giving it to him twice daily when he was 14 months old. It was the final piece of the puzzle. As long we watched what he ate and gave him his elderberry twice a day, he was golden!

My husband and I, on the other hand, weren’t so hot. We were feeding our son in such a healthy, nutritive way, but we were still eating a conventional SAD (Standard American Diet). I was obese, tired, and unhappy with myself. In December 2012, I decided I had enough. I tried to go back as close to the diet I was on when I battled candida. It had a “new name” now: Paleo. I was feeling much better but found myself falling into bad habits sometimes since my husband still had not changed his diet and there were always “temptations” around the house. Finally, a few weeks ago, my husband got fully on board. We watched multiple food documentaries, researched, discussed, and truly began to change the way we think about food altogether.

It’s not a fad diet. It isn’t short-lived. It’s quite a simple concept but one that is so far from how most Americans eat these days: Just eat real food. That’s it! Vegetables, fruits, healthy fats, grassfed meats, pastured chickens/eggs/butter, wild caught fish, some sprouted nuts/seeds/legumes. We strive for this 80-90% of the time and leave wiggle room for treats, going out, eating at others’ houses, etc. We do at least 1 green juice or smoothie per day, more raw vegetables, stopped having meat at EVERY meal. For those that don’t know, my husband owned his own butcher shop for years, so this is a big deal 😉 It has already had a major effect on our health and happiness. Derek hasn’t taken acid reflux medicine in over a week (we always thought he’d have to take it his whole life!), our allergies are pretty much non-existent compared to usual, we have more energy, we are happier, and overall just feel more positive and excited about life. I’m down 23 pounds since Christmas and Derek has lost a good bit too.

Through the years I have also become very aware of the link between chemicals in our everyday lives and my health. I am very sensitive to many chemicals, fragrances, dyes, additives, etc… as is my son. I try to avoid as many as possible. I use healthy alternatives to cleaning products, bath products, beauty products, and so on. I’m always trying new homemade, locally made, natural, or organic products.

So, finally, we come to the inception of this blog and the “birth” of the freshmama. I hope to share here healthy recipes, ideas, “green” things my family does, products we use, ways to help raise a child “naturally” in an unnatural world, and snippets of our life. I hope this can be a place where I can learn from y’all as I share bits of knowledge or inspiration that I come across along the way. I hope to motivate and gain motivation myself. Mostly, I’m just a mom, excited to share my passion for helping my family enjoy fresh food and a greener, brighter life. 🙂

In the flea market mélange of allegory, anecdote, parable and chronicle, there’s a hint of masterpiece behind every velvet elvis.

that which ties us all together...